This little mother-daughter show built a strong and loyal following during its seven-year run, giving girls everywhere worthy role models to look up to. Heartwarming and witty, Gilmore Girls was more than a show, it was a religion.

A fact made only more apparent when the series hit Netflix in late 2014: not only did the ability to binge-watch every episode appeal to die-hard fans, but Gilmore Girls also found a new and eager audience.

But compelling storytelling wasn’t the only thing that made the show so charming. Stars Hollow was always a magical universe inhabited by quirky and memorable characters; Gilmore Girls wouldn’t have been the same without its strong cast.

Between sipping coffee, munching on Pop-Tarts, and getting ready for a Cop Rock marathon, you'll definitely want to take a little walk down memory lane with this comprehensive list of Gilmore Girls guest stars.
From beloved characters who showed up more than once to "blink and you’ll miss it" appearances, there's something for everyone. Take a look below to jog your memory and cram for your next "famous people on Gilmore Girls" quiz. 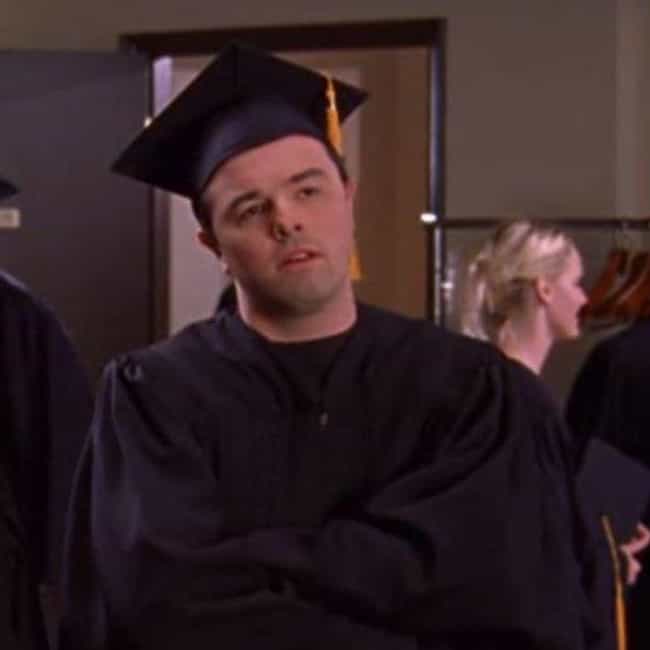 Love him or hate him, Seth MacFarlane is one of the most recognizable names in comedy. Before he became a household name, he had a minor cameo on Gilmore Girls, where he played Zach, one of Lorelai’s classmates from business school.

You might remember this infamous episode, since Rory missed her mom’s graduation because she ran off to New York to see Jess, much to everyone’s surprise. Who could blame her, though? Luke’s nephew sure filled out those leather jackets nicely.

You also heard MacFarlane’s voice in the Season 3 episode "I Solemnly Swear," where he portrays Bob Merriam, Emily’s lawyer. 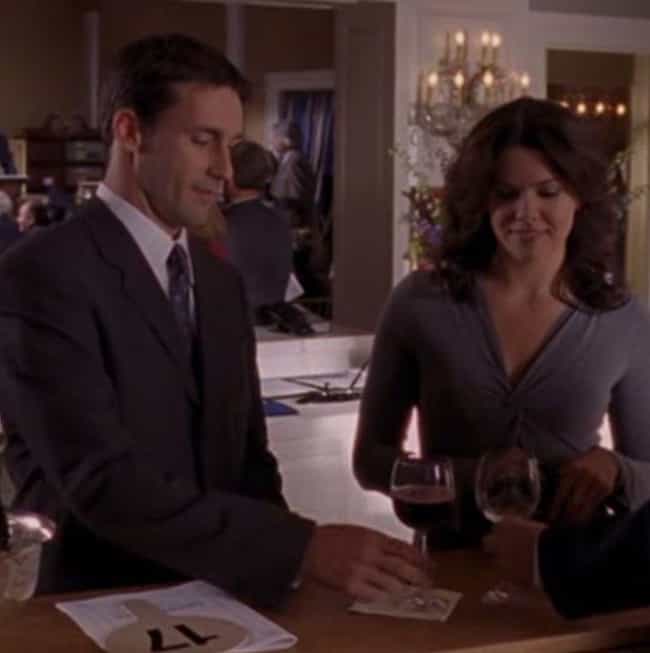 Before playing dreamboat Don Draper, Hamm was Peyton Sanders in the Gilmore universe, and Lorelai had a small crush on him. She was fooled by the pretty face though - they ended up having zero chemistry. Emily still insisted they go to a David Bowie concert together, due to DAR politics. 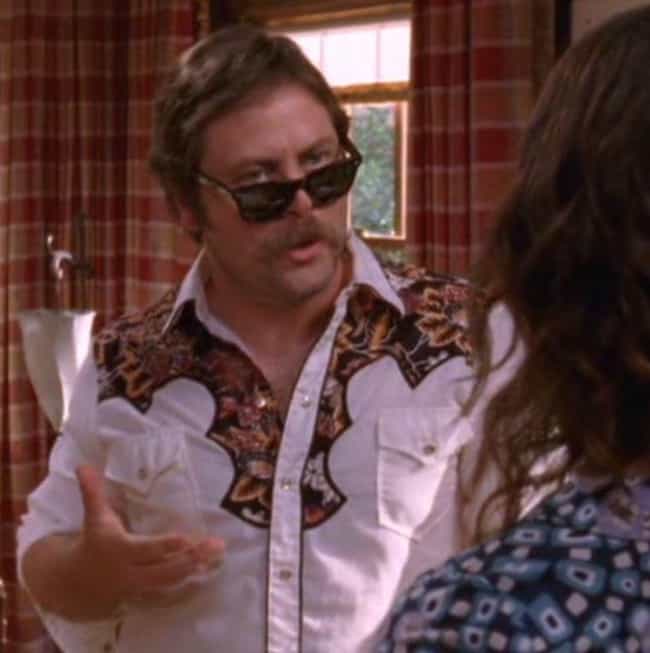 Jackson's brother Beau always knew how to get on Sookie’s nerves. We first met him in the Season 4 episode "The Festival of Living Art," when he came to be with Sookie and Jackson for the birth of their first baby, but grew displeased as our favorite chef didn’t give birth "on time."

As a side note, this is the episode that earned Gilmore Girls its only (!) Emmy - for Outstanding Makeup for a Series. Later on, Beau returned for the christening of his nephews in Season 6 and spent an entire episode hitting on Lorelai, because he thought she was a nymphomaniac. Not weird at all! 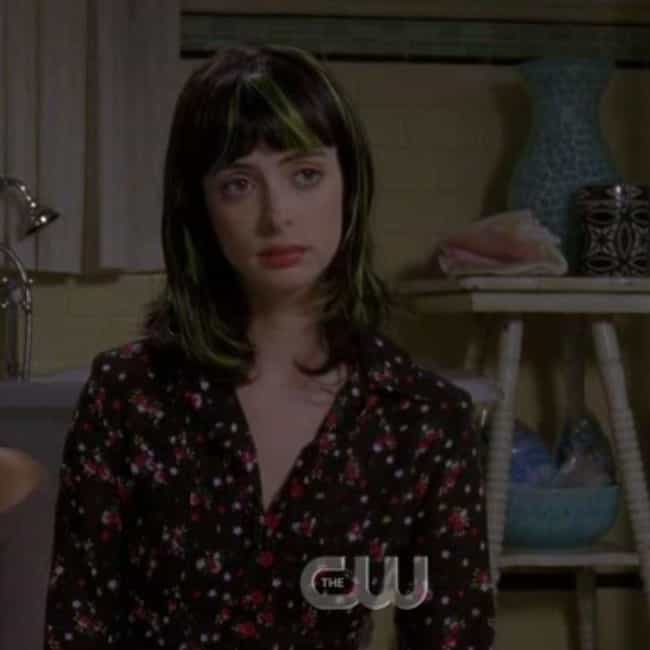 Badass Jessica Jones was once one of Rory’s BFFs, recurring as Lucy in eight episodes of the show’s last season. The girls had a falling out but eventually reconciled after Rory wrote her a heartfelt letter. They also considered starting a band. That plan fell through, much to the disappointment of fans.

Before stealing our hearts on Troy and Abed in the Morning Community, Pudi guest starred on Gilmore Girls as Raj, one of Rory’s colleagues from the Yale Daily News. He was a fan of cognac (and not the crème brûlée, which we hear is to die for) and a wannabe ski enthusiast. Let’s hope he eventually got the chance to run that place after Rory’s departure.

You can’t talk about Gilmore Girls' dreamiest boyfriends without mentioning Dave Rygalski, Lane’s bandmate and first love. He appeared in nine Season 3 episodes and managed to give us all the feels in the process. Sweet, attentive, and patient, Dave was willing to go to great lengths to win over Mrs. Kim. Remember the heartfelt speech he gave in order to take Lane to prom? He broke our hearts when he left for college, but we did get to enjoy his Seth Cohen alter-ego, so all is forgiven.

Episode: "Twenty-One Is the Loneliest Number" (Season 6, Episode 7)
Role: Herself

What better way to celebrate Rory’s 21st birthday than with a cameo from Madeleine Albright herself? Rory has a dream that the former Secretary of State was her mother, which is disturbing and wonderful at the same time (and probably the only good thing that came from Rory's stupid fight with Lorelai).

Greenfield later became king of Apartment 4D as adorable Schmidt on New Girl. Before he figured out how to keep his hair under control, he played one of Dean’s buddies in charge of throwing him a kickass bachelor party in the gut-wrenching Season 4 episode "Chicken or Beef?" The party died when Dean started reminiscing about Rory, so we all knew his marriage was doomed from the start. That didn’t stop us from ugly crying when he exited the church and we saw Rory’s sad expression.

The Glee actress has a long string of TV appearances on her resume, but you might have missed this one. She played a nurse in the Season 1 episode "Forgiveness and Stuff," when Richard is rushed to the hospital following a heart attack. She had to endure the wrath of Emily before Lorelai showed up - not an easy gig.

When the Gilmore girls took an unexpected road trip to Harvard, there was a familiar face attending the lecture Rory sneaks into. This was way before Heroes dazzled and then disappointed, so you’re totally forgiven if you didn’t notice that the student Rory has a debate with is none other than Masi Oka.

How perfect was this cameo? And very fitting for the finale. Amanpour shows up at the Dragonfly Inn, so Lorelai naturally rushes her daughter to meet her idol. Rory is star-struck but still manages to make a lovely first impression, despite wearing her pajamas. Amanpour even ends up giving Rory some great career tips - and a business card! Sure, they advise against meeting your idols but, in this case, it went pretty darn well.

Before becoming a household name on Saturday Night Live, Pedrad had a small cameo on Gilmore Girls. She played a waitress who had the guts to try to steal some of drunk Rory’s dirty napkins. The horror!

Before charming us in a little show called One Tree Hill, Chad Michael Murray recurred as Tristan during Gilmore Girls' first two seasons. He played the proverbial bad boy and had a huge crush on Rory, but didn’t succeed in getting between her and Dean. He even bought tickets to PJ Harvey - what a waste.

Borstein was initially supposed to play Sookie. Although there's no doubt Melissa McCarthy did the role justice, there’s an unaired pilot you might want to check out that will totally blow your mind. That being said, Borstein ended up guest starring a few times as Drella, the talented but über-sarcastic harp player. She then played Emily’s stylist, Celine, in later seasons.
Share 0 Tweet Pin it 0 Fancy +1