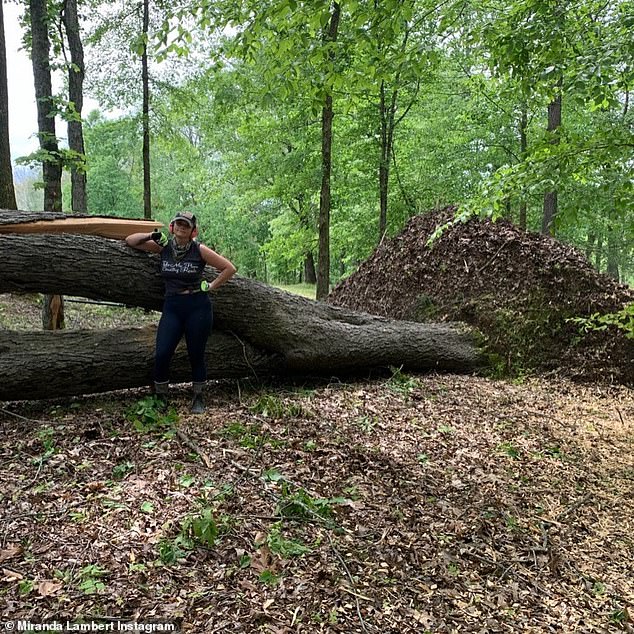 Miranda Lambert has revealed the damage storms in Tennessee caused at her $3.4million Tennessee farmhouse.

The 36-year-old country star took to Instagram on Tuesday morning to share images of the destruction which left 100,000 people including her without power.

Despite the havoc the storms left on the area, Miranda was happy to report that no person or animal was hurt on her property. 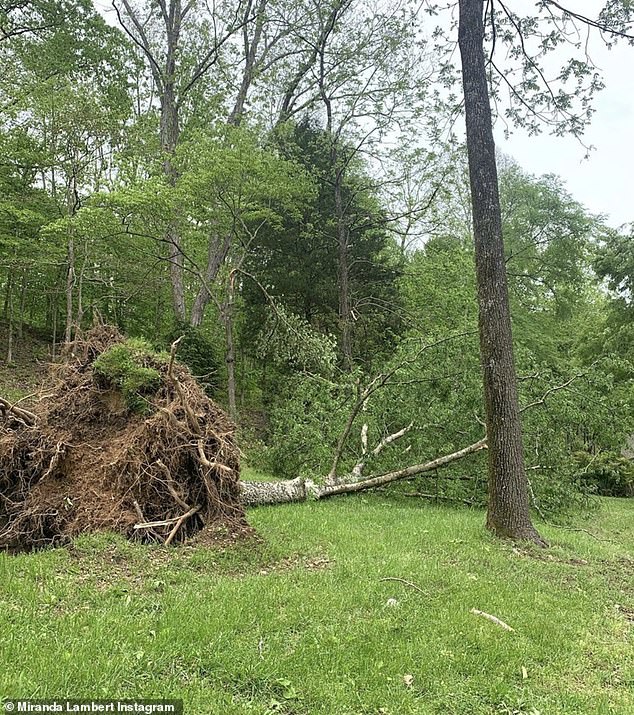 She wrote:  'The storms that came through TN this weekend took a toll on our farm. So very thankful no one was hurt Including animals and structures. A ton of huge old trees just uprooted and snapped in half.'

Lambert posted several images of toppled over trees on the property as there were reportedly 80 reports of fallen trees reported in Davidson County alone. 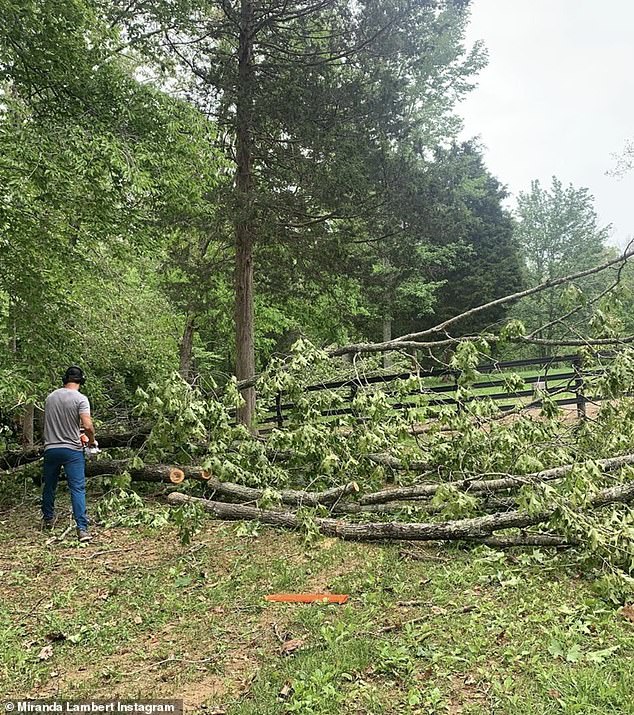 The initial number of people without power was more than 130,000 according to Nashville Electric but by Monday it had been reduced to 100,000.

Lambert wrote: 'I know, like us, a lot of folks in Nashville and surrounding areas don’t have power. I think that’s the lesson, for me anyway. God keeps reminding us who’s in charge.' 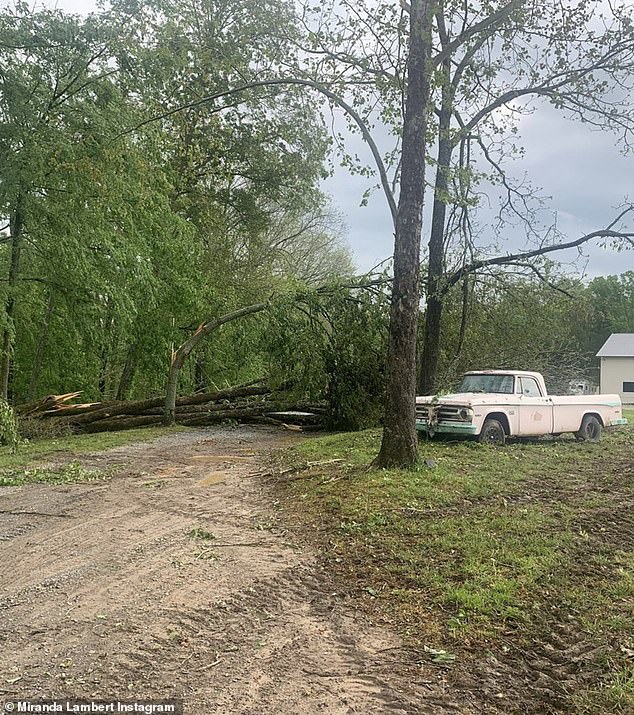 This came just a week after she shared a glimpse inside the Nashville farmhouse she shares with her second husband, Brendan McLoughlin.

The singer had documented her relaxing Sunday afternoon on Instagram after cooking up a storm for her 28-year-old love. 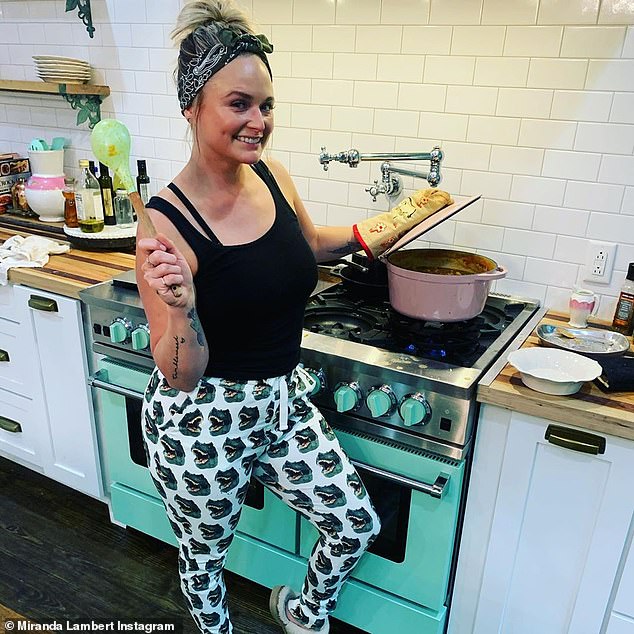 The couple are hunkering down at the $3.4 million 400 acre Tennessee farm she purchased following her split from first husband, country singer Blake Shelton.

'Sunday's best. What are y’all doin?' she began the candid post.

'T-Rex sweats ( my fav but of course the matching shirt has a red wine stain ). Vegetable Soup; Garden of Eatin’; Sugar Pie the mini horse; Brendan laughing at the number of dogs we have tryna find somewhere to sit; Coop De Ville in full swing; JD in the way, in the kitchen. Always.'

Miranda's long list of activities was complemented with various photos of her husband and animals on their farm. 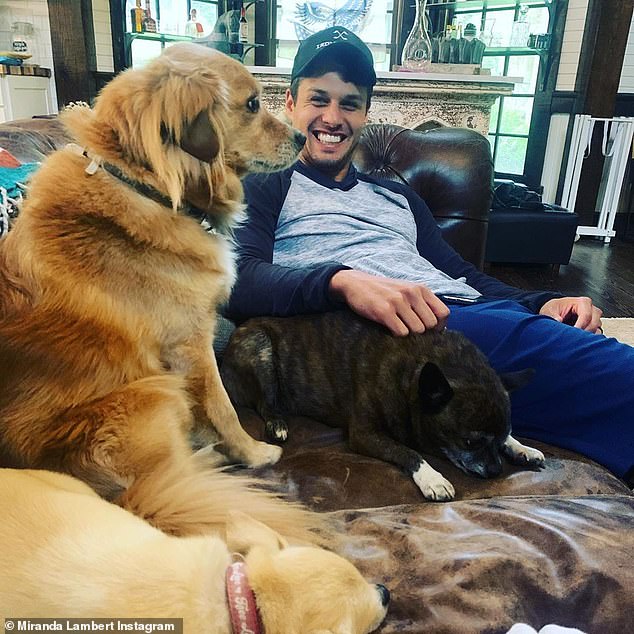 The "Mama's Broken Heart" singer was seen in the kitchen cooking while wearing T-Rex pajama bottoms and a black tank top.

Miranda accessorized with a bandanna on her head and appeared to be wearing very little to no makeup.

Newly retired NYPD officer Brendan, who earned a 'hot cop' label during his time with the force, was in his element on the couch with all their dogs surrounding him. 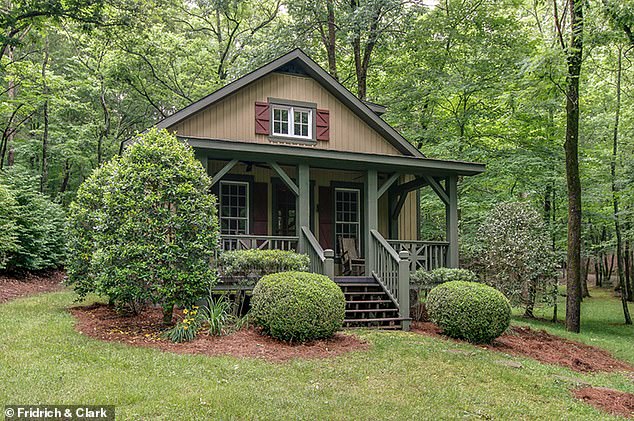 The property in Primm Springs - an hour South West of Nashville - has three residences on it.

Along with their many chickens, the pair have nine dogs, four cats, five horses, and two rabbits living with them.

And it appears as though Miranda has done some remodeling in the kitchen.

The Automatic singer was seen standing in front of her customized aqua 48 inch Blue Star range top and oven, retailing for upwards of $12,000. 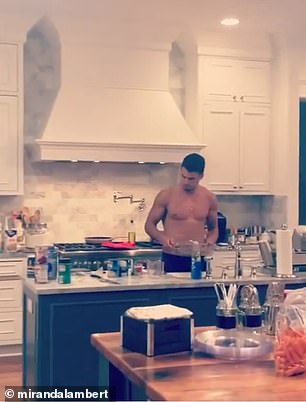 While Miranda looked happy and relaxed on Sunday, she revealed earlier in the month that her anxiety had been 'through the roof' amid the global pandemic.

'For the next few months for me, there are no shows, no sound checks, no bus calls, no flights. Just home,' she shared at the time.

'I’ve started working on some projects around the farm that I kept running from because I had to leave for work and some I’ve wanted to run from because organization is not my fav.' 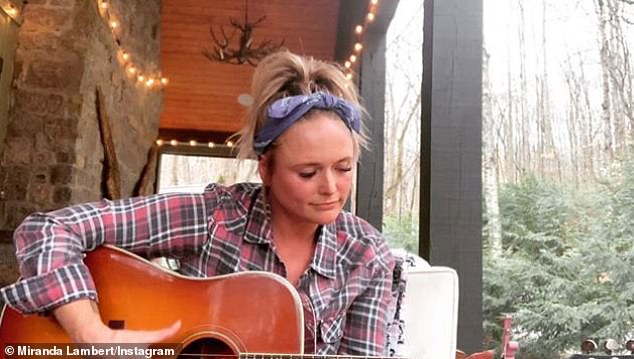 She also shared she'd been having virtual happy hours with friends while spending time with her husband and their animals.

Miranda shocked fans when she announced her marriage on social media to her unknown man in February 2019.

The pair met on the set of Good Morning America when she was performing with her band, The Pistol Annies, in November 2018 and he was there as part of the NYPD. But they didn't connect until the other members of her girl group, Ashley Monroe and Angaleena Presley, invited him backstage to watch their show without her knowledge.

'My girlfriends, the Annies, saw him and knew I might be ready to hang out with someone. They invited him to our show behind my back.'

'They plucked him for me. My security guy Tom, he was in on it too. He said to me, 'He’s here. And he’s pretty"', she recently told the New York Times.

But it hasn't always been easy for the pair, with Brendan fathering a child just days before they met.

His son, Landon, 16-months, is the offspring from a fling he had while allegedly cheating on his former fiance, Jackie Bruno.

As for Miranda, she was previously in a high profile marriage with fellow country singer, Blake Shelton.

The pair began dating in 2006 before marrying five years later in Texas.

However, their love fell apart and they filed for divorce in 2015. Blake has since moved on to Gwen Stefani.