Multiplatinum songstress Miranda Lambert was spotted grinning ear to ear while on the arm of husband Brendan McLoughlin as the pair casually made their way through New York City's Soho neighborhood this weekend.

Dressed for comfort, the 35-year-old singer wore a muted sweater under a leather jacket and a faded ball cap as the pair happily strolled through town.

Likewise, her police officer hubby chose grey sweatpants, a black sweatshirt and a ball cap of his own for the outing. 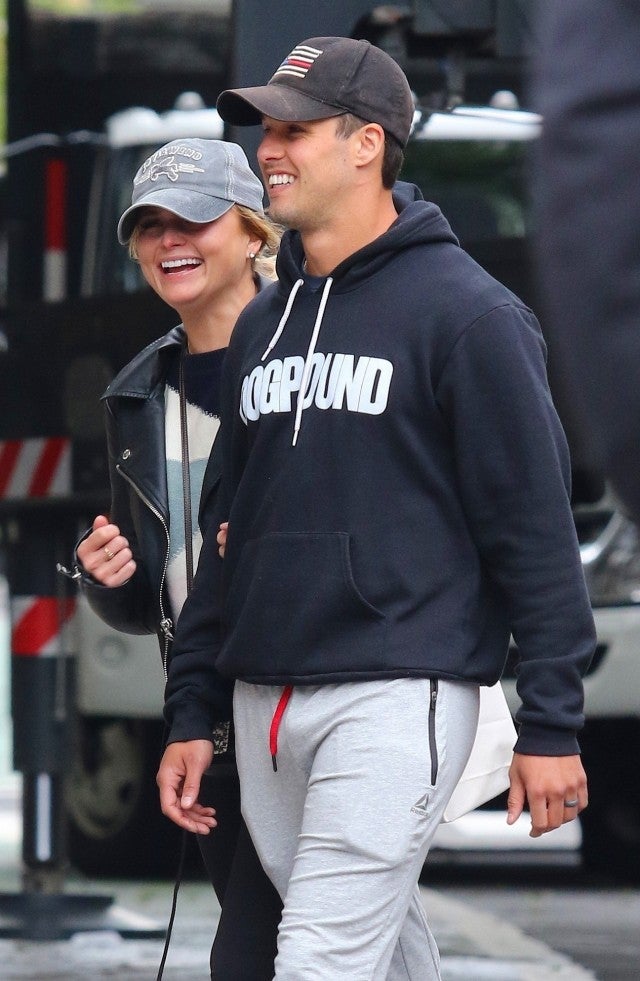 The hitmaker shocked fans in February when she announced not only that she was dating McLoughlin, but they were already husband and wife! "In honor of Valentine's Day I wanted to share some news. I met the love of my life. And we got hitched! My heart is full. Thank you Brendan Mcloughlin for loving me for.... me. ❤️ #theone,"she wrote alongside some touching wedding photos from their big day.

According to an insider, Lambert's inner circle was overjoyed about their nuptials and the change the relationship has brought into her life.

"We've never, ever seen her so happy and think she's finally found her one and only," the source stated. "Miranda and Brendan both want kids. [She] never felt ready to have children until she met Brendan and now she's excited to be a stepmom. She even says it's great practice for when she has a baby."

McLoughlin already has a 5-month-old baby from a previous relationship. The source also noted that he is a source of security for the star.

"Brendan makes Miranda feel grounded, centered and very safe. Everyone has been loving that she fell for a man in uniform," the source added. "Miranda is relieved to have found someone who isn't in the music industry. Brendan is perfect for her."

Then, earlier this month, the couple made their red carpet debut at the 54th annual ACM Awards where Lambert wore a stunning neon green dress while he kept things classy in a simple black suit and tie.

During her performance of "Little Red Wagon" at the show, Lambert dropped a subtle bit of shade for her ex-husband, Blake Shelton. Instead of singing "I live in Oklahoma," she belted out "I got the hell out of Oklahoma."

This is a reference to when she lived with Shelton in his home state during their marriage.

Although this isn't the first time she's showcased this new lyric, it was definitely the first time Shelton and his new flame Gwen Stefani were in attendance.

However, according to a report by InTouch, the Voice judge and his girlfriend left during the commercial break before Lambert's performance.